The San Francisco Mime Troope was founding in 1959, making it one year younger than me and the same age as the Cuban Revolution.  I have only been going to their political pantomime theatre in the parks for 28 years, having missed once, in 1995.


How can one be critical of people whose work one adores and admires?  Who am I, this radical mechanic from back east to provide any theatre reviews?  Yet here I am with a new encounter with an old love that left me feeling a bit sad and a lot disappointed.


This year’s piece is called The Wall, and they mean Trump’s wall of course.


It was sweet that the band started the pre-show set with a jazz instrumental of the Pink Floyd song.  They went on to do some other surprising covers that I found excellent.


If there is anything that describes the Mime Troope over the past two and a half decades it is an every improving production value.  The music is great.  The acting is brilliant.  The politics are strong and in sync with my own.  The staging is amazing for what they can do with so little.  The shows go on professionally and are smooth and well presented.  If there was an opening day mess up on stage under the afternoon sun, I didn’t notice it, nor did most of the fellow members of the audience with blankets on the grass.


I found it predictable, a bit boring and worse still, not very funny.


This is the same Troope that once suddenly converted an argument between the Dictator of Obscuristan and a US state department operative into an S&M ballad that mixed that kind of a sexual relationship with the international relationship between the United States and producers of petroleum.  That was unpredictable, made a political point and made my ribs hurt from laughter.


Don’t expect anything like that in this year’s show.


Maybe the Mime Troope wants to move to drama and away from comedy?  Nobody said that they have to stay stagnant and not change up their art.  There is certainly little to call funny in what is going on with US immigration policy.


But shouldn't drama have its innovation and surprises too?  What I heard today was the predictable language about immigrant rights that one would hear from a lawyer or some nonprofit fundraiser.  It treated Mexican illegal immigration with the clichés of the movie El Norte.


It would have been nice to introduce the traditional migratory labor across Mexico and stretching into the US as being from OAXACA State.  Mixteco, Zapateco and Triqui would be good native languages to show, given that they are present here in our fields and construction sites.  But I digress knowing more about Mexico than I do about theatre.


It's not that all the themes were not good, they were just not engaging.  Little bits like a soldier having served “in the DMZ of North Korea” feels sloppy and detracts from the piece’s authority.  (US troops serve along the De Militarized Zone on the South Korean side). And like I said, most of it was so predictable that the pace started to feel slow and I found myself waiting for it to end.


There were some of the brilliant Mime Troope funny bits, including Velina Brown perfectly doing a short role as a shopper that everyone in Oakland has met at least once.  One sequence of quick lines was funny, witty and sharp at the same time.


Maybe I am just being critical of a good show because in the past they have put on so many great shows?  It would be great to see an interview with their playwright and often actor Michael Gene Sullivan to hear what he thinks of this piece and where he wanted it to go.  Seems that the crowd liked it a lot more than I did, so maybe I missed something.


There was something different and something eternal about the SFMT audience.


On the side of being the same as always, we were mostly white.  Much more white than any part of the Bay Area, even the North Berkeley neighborhood around the park.  We are also many of the same people, just older.  At 59 I should not feel that I am below the median age.


There were a few people of color, and a few more people under 50 than that, but a lot less of both than the crowds I first sat in when I moved to the US in 1989 and met my first Mime Troop fans in Dolores Park.


There were two other big differences in today’s audience.


1, There was a lack of common courtesy with people bringing dogs into the middle of the crowd, walking them and/or themselves over other people's blankets, and setting up chairs blocking the view of those on blankets behind.  All of these things I had learned to be against the rules from the Troope staff in earlier shows.  In fact, I own a chair that sits flat on the ground that I bought specifically for Mime Troop shows and found that it was a polite thing to use at other outside shows, such as Stern Grove.


2, There are always fewer of us.  Once upon a time, we would make going to a Mime Troope show a group outing, a picnic that we started early to get our blanket somewhere with a good view.  Today it was not hard to get to the side of the people in the full size chairs and see the stage without arriving early.


Like I said, others enjoyed the show more than I did.  When the dialog said those good things that I agree with, but found a bit old hat, many hands clapped.  When the show was over there was a standing ovation.


I watched everyone stand up from the back, next to the audio booth.


In years past, that same spot was the middle of the crowd. 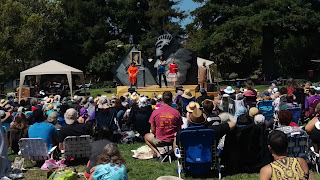